Xiaomi Redmi K40 Sales Report: A month after the announcement of the Redmi K40 series of smartphones in China, Xiaomi told how well the new items are selling.

According to the manufacturer’s poster on the Weibo social network, 1 million Redmi K40, Redmi K40 Pro, and Redmi K40 Pro + devices were sold in 23 days. Which of these smartphones bought the best Xiaomi does not say, but it can be assumed that these are two top models. Since they went on sale right away, and the base Redmi K40 came later. 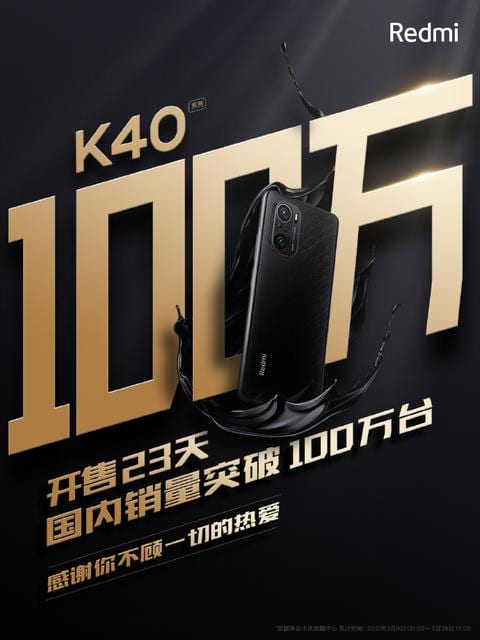 By the way, as for previous years, for example, Redmi K20 smartphones showed the same result in a month. But how well the Redmi K30 series sold at the start is difficult to say since the devices did not enter the market at the same time.

Recall that the Redmi K40 series of smartphones cost in China from 310 to 575 US dollars. The devices have Samsung AMOLED displays with a frequency of 120 Hz, Snapdragon 870/888 chips, up to 12 GB of RAM, IP53 protection, stereo speakers, cameras with several modules, and main sensors of 48 MP, 64 MP, or 108 MP, as well as batteries with fast charging at 33 watts.

Xiaomi will present many new products on March 29