According to the report, in the first quarter of 2019, Apple’s iPhone shipments in China fell by 30% year-on-year. In contrast, Huawei’s contrarian growth of 41% continues to dominate.

According to the report, in the first quarter of 2019, China’s smartphone market shrank by 3% year-on-year, with total shipments of 88 million units, the worst market performance in six years.

Huawei (including Honor) has shipped 29.9 million smartphones, and its market share has increased. 34% of the record, an increase of more than 10% over the same period last year.

Followed by OPPO, Vivo, Xiaomi, and Apple, the four shipments fell year-on-year. Among them, OPPO shipped 16.8 million units in the first quarter of 2019, down 4% year-on-year, with a market share of 19.1%.

In the previous quarter, the shipment volume was 15 million units, down 2% year-on-year, and the market share was 17.1%. Xiaomi is the biggest loser among domestic mobile phone manufacturers, with shipments of 10.5 million units, a drop of 13%, and its market share dropped from 13.3% to 11.9%. 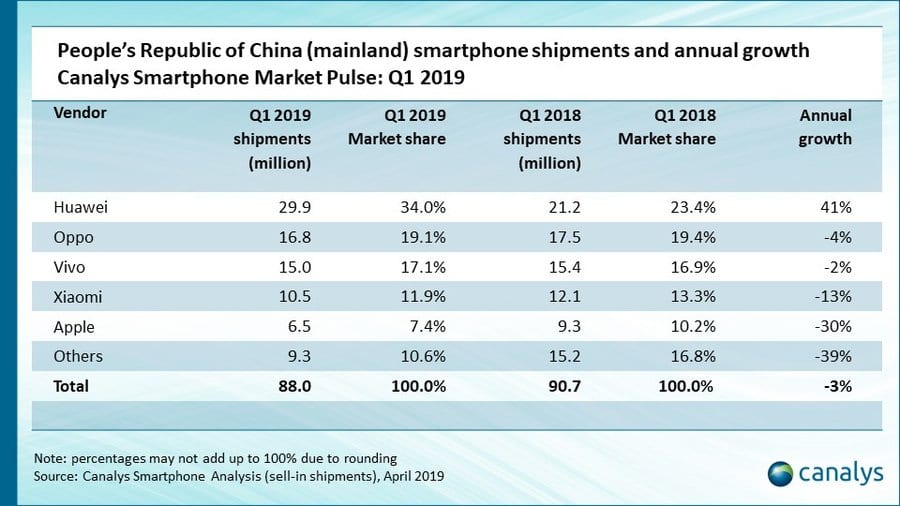 Canalys analyst Mo Jia said: “Apple’s performance in China is worrying, because the worst quarter of iPhone shipments is usually the second or third quarter, not the first quarter, after all, the new equipment is still fresh enough.

As a result, Apple has taken steps to lower the retail price of the iPhone, which has greatly eased the pressure from channel partners.

The analyst also said, “Although the installed base of the iPhone in China is far more than 300 million, how is Apple? Preventing users from giving up the iPhone and turning to the Android camp is crucial. Apple faces an important challenge in China, how to localize software and services as quickly as in Western markets because iPhone hardware is more competitive in China than in other markets. Therefore, if you can introduce the latest features such as 5G and localization software next year, it is very important to prevent the iPhone from shrinking further.” 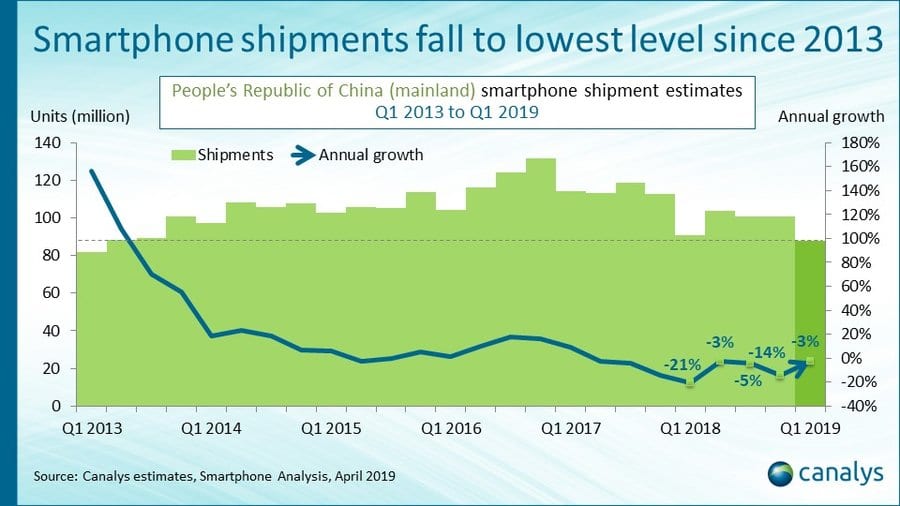 As far as the entire Chinese market is concerned, analyst Mo Jia said: “The decline in China’s smartphones has slowed slightly, and it has finally eased after a bad year. In the face of the strongest competitor in history, Huawei, each major Vendors are moving at full speed, releasing new products and increasing marketing investment to maintain market share. During the quarter, Huawei increased its investment in physical stores and used its own size to beat smaller manufacturers in the competition. Huawei has already Going deep into rural China.”

Mo Jia added: “Huawei has also upgraded the design and experience of many retail stores and added a wider portfolio of consumer IoT devices and accessories to attract more passengers. These investments will help Huawei to get more customers from other vendors, such as customers from OPPO and Vivo, and in the past few years, the two mobile phone manufacturers have an absolute advantage in online channels.”

Canalys Another analyst Yiting Guan said, “OPPO and Vivo are changing their own product strategies to establish a new brand. Vivo is looking for a larger product group in China. To cover a wider range of consumers than ever before, there are currently up to seven product lines available. OPPO has focused on the latest Reno series to regain its appeal in the mid to high-end market. What’s more interesting is that OPPO’s RealMe derivative product line has also been introduced to China from India, competing with Xiaomi and Huawei in the low-end market, including Honor.” 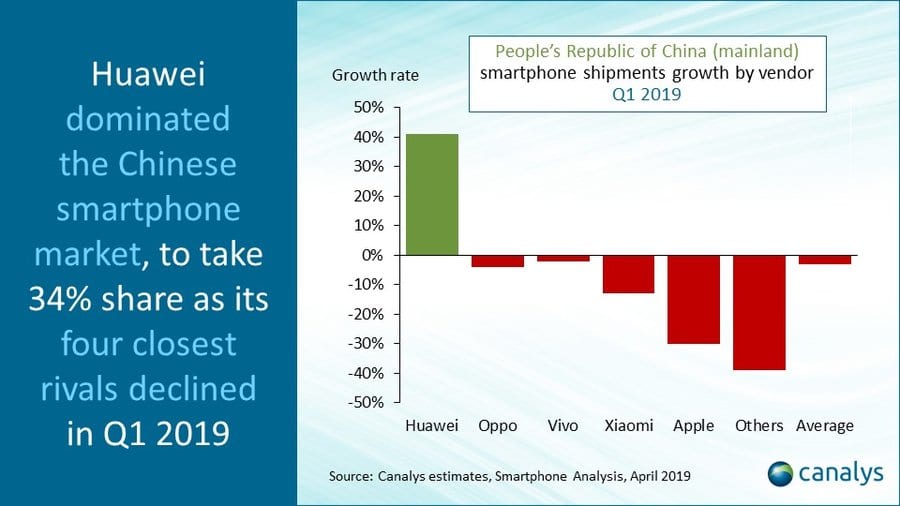 Yiting Guan said: “Because of the efforts of major manufacturers, Xiaomi’s original site has become more and more crowded, and giving the red rice brand more autonomy, allowing it to compete in the low-end market, will be more helpful to Xiaomi. Brands are welcoming new growth in the high-end market. Although Xiaomi’s consumer IoT devices have achieved success in China, smartphones are still the core business, and maintaining the growth of smartphone market share will translate into a user base expansion. The overall strategy is crucial.”

Xiaomi’s shipment figures for Q1 2019 was wrong, IDC will update figures next week

Moto Z4 appeared on the new render leak with a drop-like cut on the screen and one main camera.