Naturally, there are no technical characteristics of the machine. The company only shared patents with the first drawings. On them, the car looks similar to the Tesla Model X, although the British press compares it with the Range Rover SUV due to its similar dimensions.

Mass production of new items is scheduled to begin in 2021 at a factory in Singapore.

In addition to patents, the company Dyson shared a letter of the founder, which can be read below: 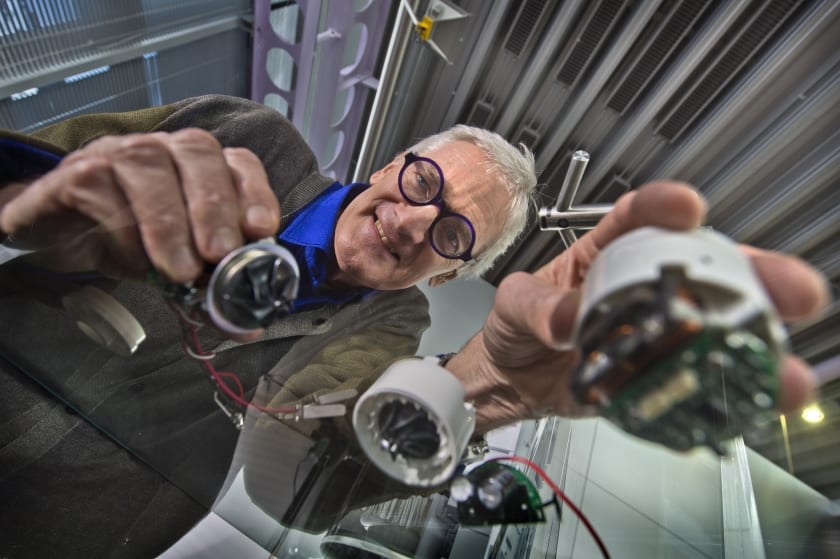 Developing new technologies is an exciting experience that energizes. This can be said about the creation of our electric car. It will be developed, manufactured and sold exclusively by Dyson. This is a very complex engineering project, in which we put together an outstanding design, scientific, design, and production expertise from the UK, Singapore … I am very proud of our strong team of over 500 people combining Dyson experience with automotive innovations.

The flying field at Hallavington is filled with the spirit of progress. In the Angara 86 work many employees from the automotive team. In the Angara 181, there are currently testing grounds, including climate chambers and a roller stand. And in the Angara 85 we next month will begin to collect cars for the final stage of testing. Some test tracks are ready, others are close to completion. And we are preparing to lay the ground for our advanced manufacturing facility in Singapore. We develop the best technologies as fast as possible, and our team performs fantastic work, bringing them to life.

We always keep secret the features of our products until we prepare everything for launch. The electric car is no exception, let’s not deviate from this rule. However, I can say that in this product we will use fundamentally new technologies and implement several innovative solutions. Therefore, it is important to protect them with patents. 18 months ago we sent applications for our first patents that affect the device, the aerodynamics and the efficiency of the electric vehicle. At the same time, it is important to correctly assess the situation and remember that we do not always use our patents or create products based on patent applications.

Of course, the patents do not disclose the actual appearance of our electric car and do not describe their specific features. Instead, the car is described in general terms with a cursory mention of some innovative solutions that we are considering. These documents talk about a number of possible differences between our electric car and the fact that it was created from scratch. And from the very beginning, the development was based on the principles of efficiency and range of movement without recharging.

Most importantly, many of our competitors create electric vehicles based on existing formats, adapting them to the electric motor. This approach requires less investment, but it usually misses weight and improves aerodynamics, which could improve the efficiency of the car. Another popular approach is the focus on small models, which allows you to reduce weight by increasing the range of movement. However, the size of the cabin and ride comfort on such cars make them less attractive and comfortable.

In patents, we specifically covered only the minimum number of characteristics, but at the same time revealed some ways to improve electric vehicles.

Big wheels: I have been inspired for a long time by wheels and their use in such engineering masterpieces as Issigonis Mini cars and Moulton bicycles. But we have chosen a completely different path! The patents describe an electric car with very large wheels, which can reduce rolling resistance and increase ground clearance. As a result, the car is well suited for urban roads and rough terrain. It also increases the travel distance and efficiency, which is vital for a car, where every energy joule should be used efficiently. In addition, the patents depict the wheels located as close as possible to the front and rear parts of the body. This increases maneuverability by increasing the front and rear corners of the terrain and improving handling on rough terrain.

Improvements in architecture and aerodynamics: the aerodynamics and efficiency of an electric vehicle largely depend on the front end of the body. In this regard, the patents describe the salon in which the driver’s seat is tilted back. This reduces the height of the body and the angle of the windshield, reducing drag and increasing the range of movement. At the same time, the extended wheelbase allows you to make the interior more spacious and install larger batteries, which increase battery life. As a result, a low center of gravity is formed, which improves handling and improves the driving experience.

I want you to understand me correctly: at this stage, we are NOT talking about the electric vehicle that we are currently developing. Details we will inform later. Of course, the product will work on the basis of our own engine, our own battery technology, and our internal research in key areas such as air conditioning, cleaning, heating and cooling, aerodynamics, artificial vision systems and software. But we will tell about it another time.

We are preparing to launch an electric car in 2021 and will share other news with you from time to time. That’s all for today.

Xiaomi has released a wireless vacuum cleaner for $ 180

BMW has revealed the specification of the i4 electric car

Huawei P30 Lite in Ukraine: a smartphone with a triple 48 megapixel camera, a Kirin 710 chip and a special price of 9000 UAH

OnePlus 7 and OnePlus 7 Pro are officially presented: top features and a price tag of 560 euros