Home » Blog » Following the footsteps of Huawei and Apple: Xiaomi hints at the announcement of its own Surge processor
News

Following the footsteps of Huawei and Apple: Xiaomi hints at the announcement of its own Surge processor

Xiaomi hints Surge processor: On March 29, Xiaomi has planned a presentation, where, first of all, they should present a folding smartphone Mi MIX, Mi 11 Lite, Mi 11 Pro, Mi 11 Ultra, Mi Notebook Pro (2021), and other new products. But it seems that the company has prepared something else interesting for this day.

We are waiting for a proprietary chipset

Today, an advertising poster appeared on the official page of the manufacturer in the Chinese social network Weibo, which hints at the announcement of the branded processor. The teaser talks about a certain ” chip, designed with your own hands, embodying all the dreams of Xiaomi engineers.”

Moreover, the phrase “On March 29th, my heart surged” is most likely a reference to the chipset Surged. Recall that this is a proprietary processor of Xiaomi, which debuted in 2017 along with the Mi 5C smartphone, but it did not enjoy much success. 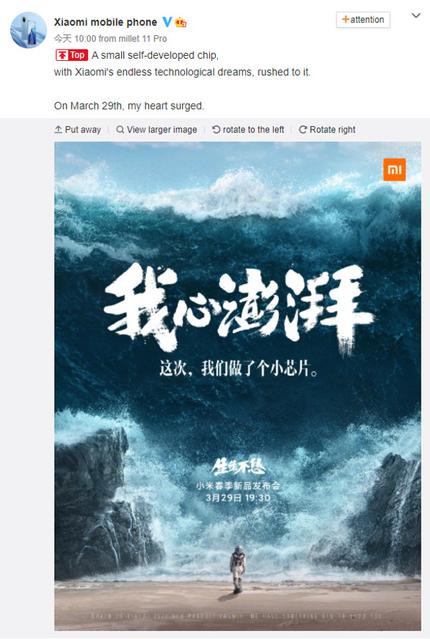 Perhaps at the presentation, we will see its successor-the Surge S2. In any case, the wait is not long, because there are only a few days left before the official announcement.

Xiaomi smartphones may rise in price due to lack of chips