The device is equipped with a large 11.5-inch display. It received thin bezels and an OLED matrix with a resolution of 2560 × 1600p, a picture refresh rate of 90 Hz, an aspect ratio of 16:10, as well as support for Dolby Vision, HDR 10 and DCI-P3. Under the hood, new items have installed an eight-core 7-nanometer Snapdragon 870 processor.

By the way, this is the first tablet in the world with such a SoC on board. The chipset is paired with 6GB LPDDR5 RAM and 128GB UFS 3.1 ROM. The built-in storage can be expanded with a microSD card. 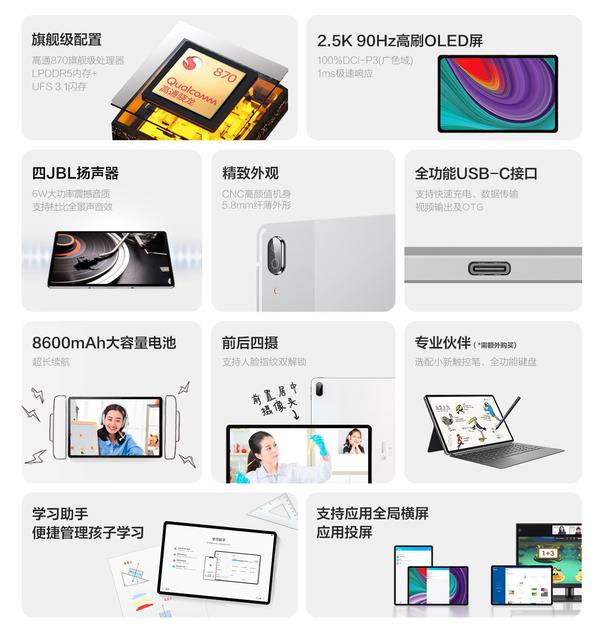 As for the cameras, there are four of them in the Lenovo Pad Pro 2021 – two on each side. The front one received 8 MP + 8 MP sensors. The second is an IR sensor for securely unlocking the device. The main camera, in turn, has sensors of 13 MP + 5 MP (120 degrees wide).

The tablet is powered by an 8600 mAh battery. It charges via the USB-C port and supports Quick Charge 3.0 fast charging. Of the interesting things in the new product, it is also worth noting four JBL speakers with Dolby Atmos, a fingerprint scanner on the side and four connectors for connecting a keyboard cover. The gadget comes with Android 11 OS and ZUI 12.5 shell.

Lenovo Pad Pro 2021 Price and when to expect?