Home » Blog » Mediatek vs Snapdragon: Which is the better option?
CompareNews

Processor is an essential component in our smartphone, MediaTek and Qualcomm Snapdragon are two well-known ones. Know which is the better in detail.

We all use smartphones in this day and age, whether it’s a cheap phone, a mid-range phone, or a flagship phone. While most individuals now conduct research online before purchasing a new smartphone to determine which one would be the best fit for their needs and budget, many others continue to buy the latest smartphone solely on the basis of its attractive appearance. People choose to ignore the processor, which is the most critical component of a smartphone.

What is a Processor in a Smartphone?

In simple words, the most important component in the smartphone is the processor. Calling it the brain of your smartphone might be not wrong. All your actions that you perform on the screen, this component is responsible for converting it all in Visuals.

The performance of your smartphone depends on the processor. Everything you do on your phone, from launching different apps to browsing the internet to playing games, is influenced by the processor.

It is able to do so because of the number of cores and a specific clock speed, which ensures that operations are always completed on time. The smoother the experience you want, the better the processor you have to get.

Intel and AMD are the two popular processors for PCs and laptops, just like there are two well-known brands “MediaTek and Snapdragon” for the smartphone processor.

Only a few smartphone firms manufacture their own hardware due to the difficulty of ever-shrinking computer processors. Rather many are on the lookout for different semiconductor companies for chipsets.

Despite geographical differences, Qualcomm and MediaTek continue to grow their chipset presence on a global scale. Here’s how it breaks down, according to Counterpoint Technology Market Research. 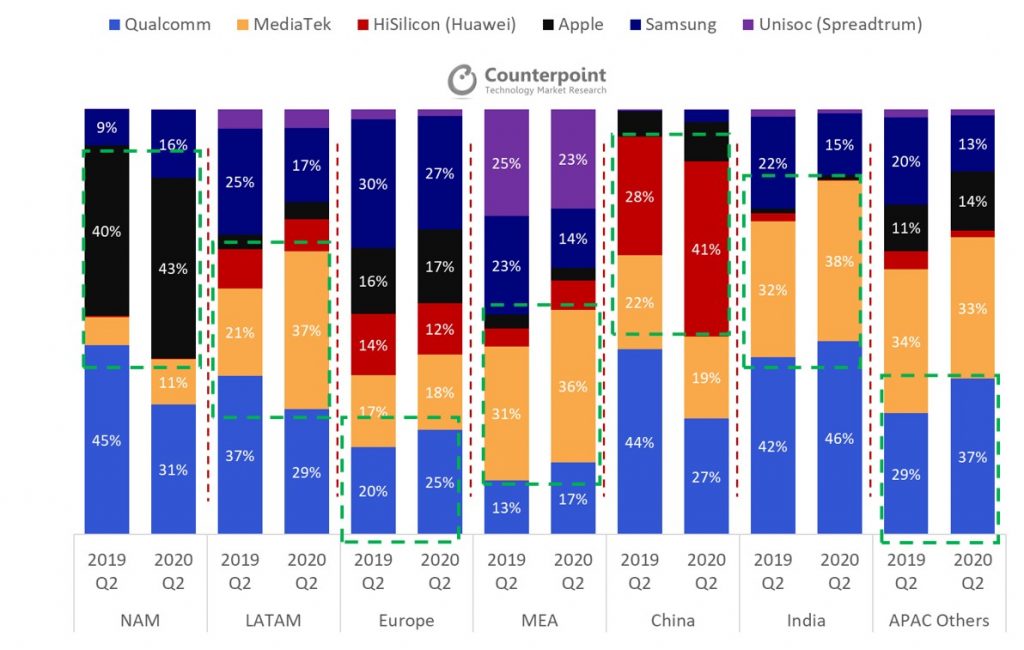 As it can be seen, Apple’s far more costly smartphones that dominating the North American market, with limited success in Europe.

The rest of the world, on the other hand, is dominated by budget Android devices, which are represented by two colors: blue for Qualcomm and yellow for MediaTek. Moreover, China has its own chip-making ecosystem, led by Huawei-owned HiSilicon.

Qualcomm and MediaTek’s success is due to the fact that they provide the same app-powering features at substantially lower prices. Additionally, many individuals are looking for smartphones that can play games. This requires greater refresh rates—60, 120, and 144 Hz—as well as faster GPU chips.

Before we get into the differences between Qualcomm’s Snapdragon and MediaTek’s processors, it’s necessary to understand how they’re made.

SoC(System on a Chip) as the Mobile Platform

Microprocessors are placed on a System on a Chip (SoC) circuit board as everything has to fit within the size of a credit card. In 1958, Jack Kilby built the first integrated circuit of this type.

Modern SoC, on the other hand, is significantly more sophisticated, having the core components such as Memory (RAM, ROM, or EEPROM), CPU, GPU, and Connectivity options such as USB, HDMI, Wi-Fi, Bluetooth, Ethernet, etc.

We can replace the RAM, CPU, GPU, and even the motherboard on a PC. A mobile SoC, on the other hand, has an integrated architecture to reduce space, making even memory upgrades unfeasible. SoCs are far more energy-efficient and compact, which is exactly what a smartphone requires.

As a result, unlike when considering PCs and other desktop computers, we cannot distinguish between CPUs and GPUs when discussing smartphone performance.

We must rely on the manufacturer to give us the optimum combo that meets our demands at a price we can afford because all of the critical components are integrated.

MediaTek is a Taiwanese company, founded in 1997 with headquarters in Hsinchu, Taiwan. It began its technological journey with TVs and DVD players, eventually expanding to wireless SoC solutions.

After March 2021, MediaTek surpassed Qualcomm as the world’s leading smartphone chipset manufacturer. It is expected to ship over 350 million chipsets to numerous smartphone manufacturers in 2020 alone.

MediaTek is the manufacturer of Helio chipsets. An affordable and powerful processor that is well-known for having multiple cores, which boosts background performance. It can often be seen as a Hexa (6), Octa (8), or even Deca (10) core for flagship phones.

The main advantage of MediaTek over Qualcomm and Exynos is the price, which can be up to two times lower for similar performance. Regrettably, the user experience isn’t great.

The most common criticism of MediaTek processors is their extremely rapid heating and reaching of high temperatures; the Snapdragon 810 had the same issue.

Despite the fact that MediaTek chips have been heavily criticized in the past by critics, their performance has substantially improved over the years. Several mid-range and budget SOCs, such as the Helio P60 and Helio P22, are more cost-effective than their competitors.

The MediaTek Dimensity series is incredibly powerful, and these even give competition to high-end chips from Snapdragon and Exynos.

By buying a device with a MediaTek chip, you are limiting yourself (in most circumstances) to a lower-middle-class smartphone or a startup model smartphone.

Some smartphones that use Mali GPU are as follows:

In comparison to the Snapdragon series, even the most expensive MediaTek chipsets are affordable, with all of them costing less than $300.

Snapdragon processors are manufactured by Qualcomm, a multinational semiconductor and IT equipment manufacturer based in San Diego, California, the United States. It was established in 1985.

The Snapdragon processors are the most well-known Qualcomm processors. Thanks to the Snapdragon 820, they are now the best on the market. This high-end variant can be found in some of the top smartphones of recent years.

The fact that Samsung has abandoned its Exynos processor says much about the Snapdragon 820’s quality. Qualcomm now dominates 65% of the 4G LTE industry, and it is especially strong in China, where Qualcomm chips are used by the five top manufacturers (Xiaomi, Huawei, ZTE, TCL, and Lenovo).

While Qualcomm’s SoC solution is the Snapdragon, the Adreno GPU has become an integral part of it.

The key advantages of the Snapdragon 820 over previous generations are its speed, low energy usage, and a 40% boost in graphics performance. The fifth-generation Adreno GPU is in charge of visuals (Adreno 530).

The Snapdragon 600 series, in addition to the 800 series, is of good quality and can be found in mid-range devices such as the Huawei P8 Lite, OPPO R5, HTC Desire 820, and others.

A smartphone with a CPU below the 600 series is not advised in light of modern technology and the introduction of increasingly demanding content such as VR or 4K. Devices such as the Samsung J5 2016 may be exceptions.

Some smartphones that use Snapdragon chipsets are as follows:

All of these smartphones are among the top 10 in terms of performance.

The higher the series number, the faster the phone will perform, but it will also be more expensive. Similarly, smartphones with hardware from the Snapdragon 860/Adreno 640 series, which comes after the Snapdragon 865, will be priced at less than $300.

The Snapdragon 600 and 700 series are targeted at budget-conscious buyers, but the Snapdragon 800 series represents premium phones with all the bells and whistles—from multiple cores and cameras to high-end gaming performance.

Qualcomm bought AMD’s Handheld Graphics and Multimedia Assets in 2009, which few people are aware of.

As a consequence, today’s Adreno is an anagram of Radeon, paying respect to AMD’s heritage.

The Realme 9i is the latest upcoming device that’ll come with the Qualcomm Snapdragon 680 processor.

MediaTek vs Snapdragon – Which is the better option?

This is a question that cannot be answered in a word. Both companies make multiple processors that are used in a variety of smartphones in varying pricing ranges. Snapdragon is superior in certain instances, while MediaTek excels in others.

However, when it comes to smartphones in general, MediaTek concentrates mostly on inexpensive and mid-range devices. The company’s chipsets are used in many mid-range phones, and MediaTek chipsets are excellent for gaming. The Helio G90T chipset was released in 2019 and debuted with the Xiaomi Redmi Note 8 Pro, surprising everyone with its outstanding performance.

When it comes to Qualcomm Snapdragon chipsets, the company produces processors for cheap, mid-range, and even premium devices. Nevertheless, in recent years, the tech giant has concentrated on mid-range and flagship CPUs, as well as 5G chipsets.

In the mid-range sector, Qualcomm Snapdragon processors lag below MediaTek Helio series chipsets in gaming performance, despite the fact that the new-generation Helio chipsets are excellent. However, in everyday use, Snapdragon takes the lead, and no one can even come close to the Snapdragons in flagship smartphones.

MediaTek vs Snapdragon – Side by Comparison

The latest mid-range chipsets from MediaTek are excellent for gaming and other activities. Qualcomm shows superior performance.

For most SoCs, MediaTek still does not release the Kernel source code to the broader public, that’s why where most apps are properly optimized for Qualcomm Snapdragon chipsets, MediaTek lags behind.

Qualcomm Snapdragon features its own in-house GPU that has been optimized (Adreno). While MediaTek uses third-party GPU Mali.

To summarize, MediaTek chipsets are somewhat superior in most circumstances if you want a mid-range smartphone, while Snapdragon chipsets are still the king in the high-end flagship sector.