The fact is that the manufacturer wants to reduce the cost of the smartphone as much as possible, and the onscreen scanners are still not a cheap pleasure. They are mainly installed inexpensive devices. Although there are exceptions, for example, Oppo K1, Galaxy A50, and Xiaomi Mi 9 SE.

On the evening of April 29, some netizens commented on Lu Weibing, the vice president of Xiaomi Group and the general manager of Redmi Redmi brand. I hope that the red rice flagship will not use the rear fingerprint. Lu Weibing responded: the fingerprint is very expensive.

Before the founder of Xiaomi, Xiaomi Group Chairman and CEO Lei Jun talked about the screen fingerprint recognition used by Xiaomi 9. 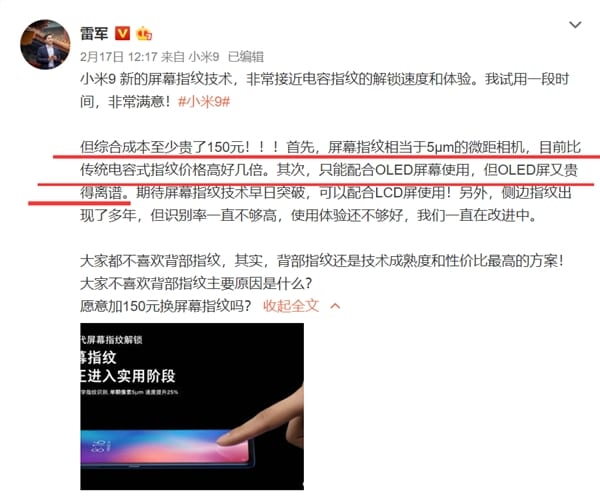 The flagship smartphone Redmi will work on a 7-nm Snapdragon 855 processor and will receive a 32 MP leaving the front-facing camera.

The novelty is also attributed to a triple core module of 48 megapixels, a headphone jack, a Google Pay contactless NFC chip, a 4000 mAh battery and a price tag of about $ 370.