Redmi X flagship will be more powerful than Xiaomi Mi 9

Xiaomi co-founder and president, Lin Bin, shared on the Weibo social network a list of the most productive smartphones according to Antutu.

He boasted to the head of the Redmi division that he was headed by the flagship Mi 9 line. The devices gain more than 370,000 points on AnTuTu.

Lu Weibing did not lose his head and replied that they were ready for this. Earlier, he also said that their flagship will “break” this rating.

The smartphone will operate on a 7-nm Snapdragon 855 chip, possibly paired with a cooling system. 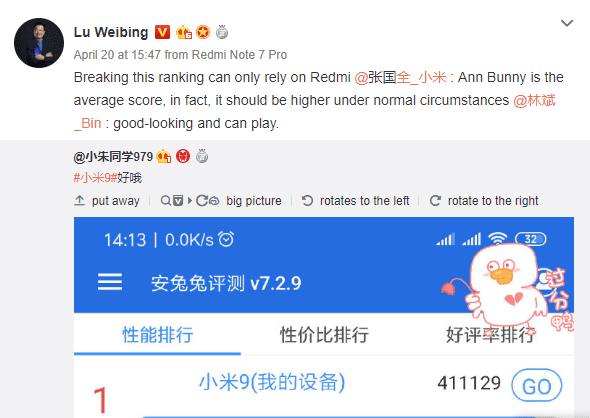 According to the leaks, the device will also be equipped with a leaving front camera, a display without openings and cutouts, an NFC chip and the main camera with a 48 MP main module.

Responsible for the autonomy of the new battery will be 4000 mAh. The device should present this month with a price tag of about $ 370.