Samsung Galaxy M40 spotted on Wi-Fi Alliance: This year, Samsung has been on the offensive in the budget segment, battling with its competitors, releasing a new galaxy M series specifically designed to provide a lucrative offering.

So far, in the form of Galaxy M10, M20 and M30 the company has presented three promising models. However Samsung is not done yet, In the near future, the company is preparing to release the model Galaxy M40, which appeared on the portal Wi-Fi Alliance.

According to a leak from the Indian tipster, the SM 405F model number belongs to the Galaxy M40, which has now been approved by the Wi-Fi Alliance and is running Android Pie. 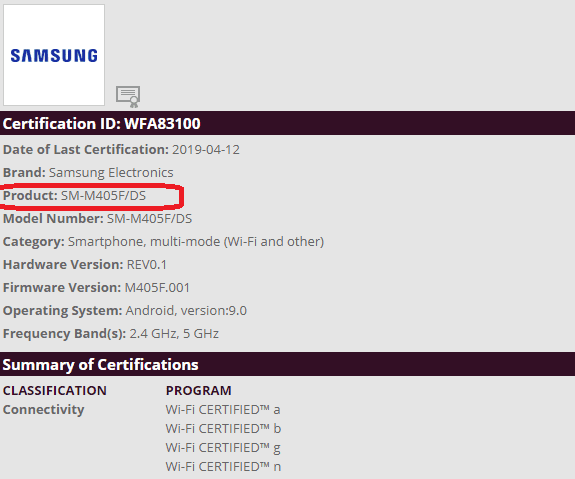 Nothing is known about the phone yet, but previously, about the Galaxy M50 also have been heard. Based on the A series replica, it can be expected that the M40 to be very slightly different from the Galaxy M30, which is already a very capable budget smartphone.

In addition to this, the A30 and A40 differ mainly in screen and battery size, while all other aspects of the hardware remain largely unchanged. It also makes us wonder how many more M series phones Samsung plans to release, as the A series is now fully represented by at least seven models.