Samsung is patenting a mobile phone with multi-plane display

Samsung patent smartphone with multi-plane display: A display that covers both the front, top, and back. The camera is also incorporated in the screen.

Samsung has patented an unusual smartphone, which, it seems, can go under the motto “The more – the better.” And we are talking about the number of screens. 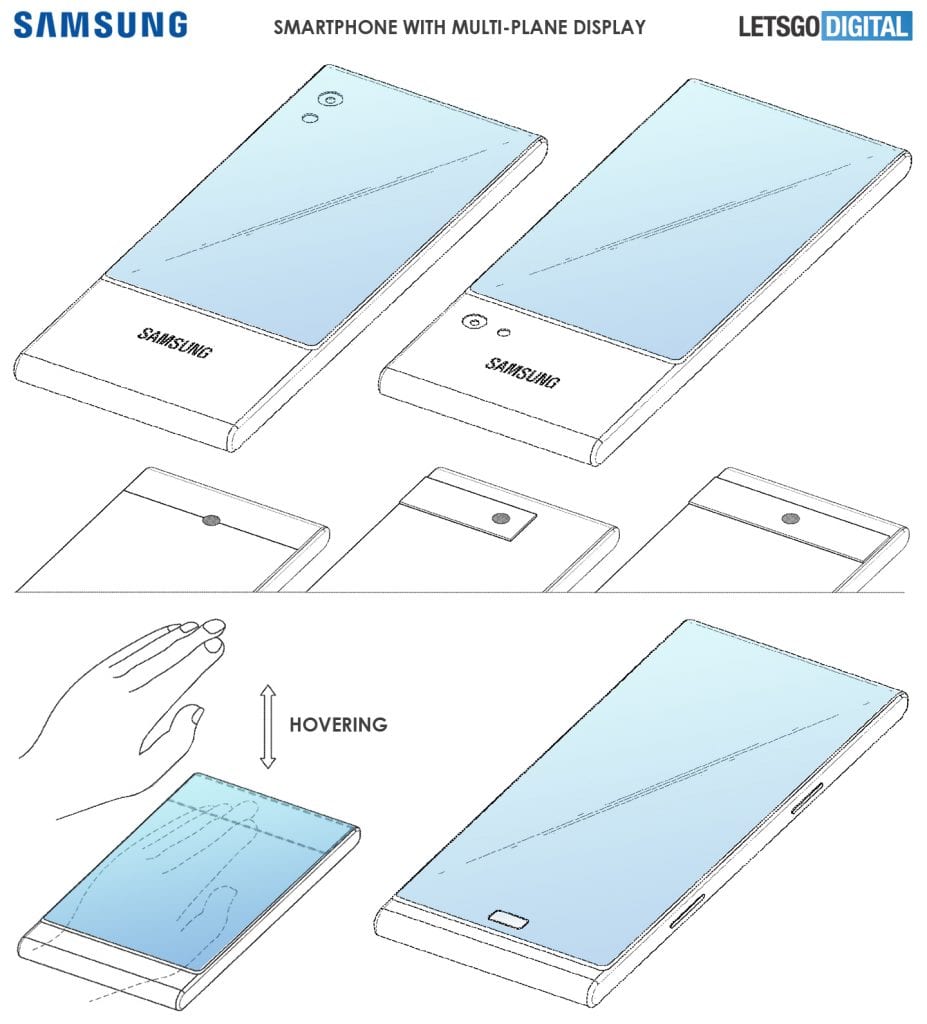 In October 2016, Samsung filed a patent with the USPTO (the United States Patent and Trademark Office) for an ‘electronic device having multiple displays and method for controlling the same’. The patent has since been approved and was published on 25 April 2019 in the WIPO database (World Intellectual Property Office).

This is a mobile device with a so-called ‘multi-plane display’. The mobile has a display on both the front and back that can be used simultaneously. The detailed patent describes various applications for this, more on that later.

The patented Samsung smartphone has three display parts, which are merged into one screen. The entire front consists of the screen. The display surface extends through the top, up to about 3/4 of the back. The screen is placed in a bracket so that it retains its fixed shape. It is therefore not a foldable telephone, but a double-sided telephone.

Although the patent illustrations on the front show a physical home button that is integrated into the display, it is clear from the patent description that this can also be a virtual button. A camera on the front is not necessary since selfies can be made with the main camera on the rear.

Various options are discussed for the main camera. This can be integrated on the back, top, in the screen, according to the same technology that is also used with the Galaxy S10 series introduced earlier this year. However, a number of alternatives are still being discussed. For example, the camera can be placed between the second and third display part, or the camera is integrated into the housing itself, the patent images show various options for this (see image above).

Display on the top of the device

There are three displays for this “wonder” at once – on both sides and another one on the upper edge. True, the top one is not even a screen, but rather, a line where notifications are displayed, like on a pager, time, date, etc. By swiping it to the front panel, the user can open the necessary application. 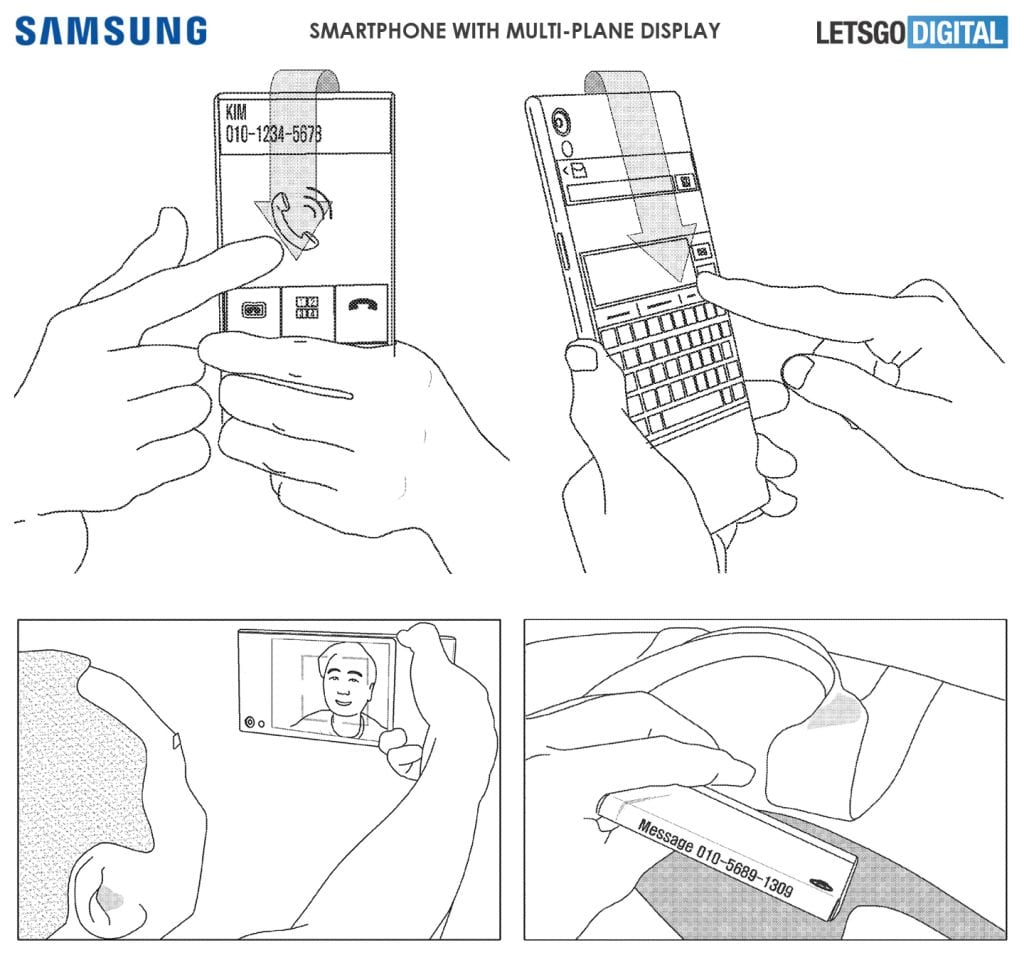 Operation of the smartphone

Two main screens will be useful during shooting. The camera will be built into the display, and you can use it for the selfie, and taking pictures of another person. That is, on one side an image will be displayed for the one who is shooting, on the other – for the one who is being filmed. 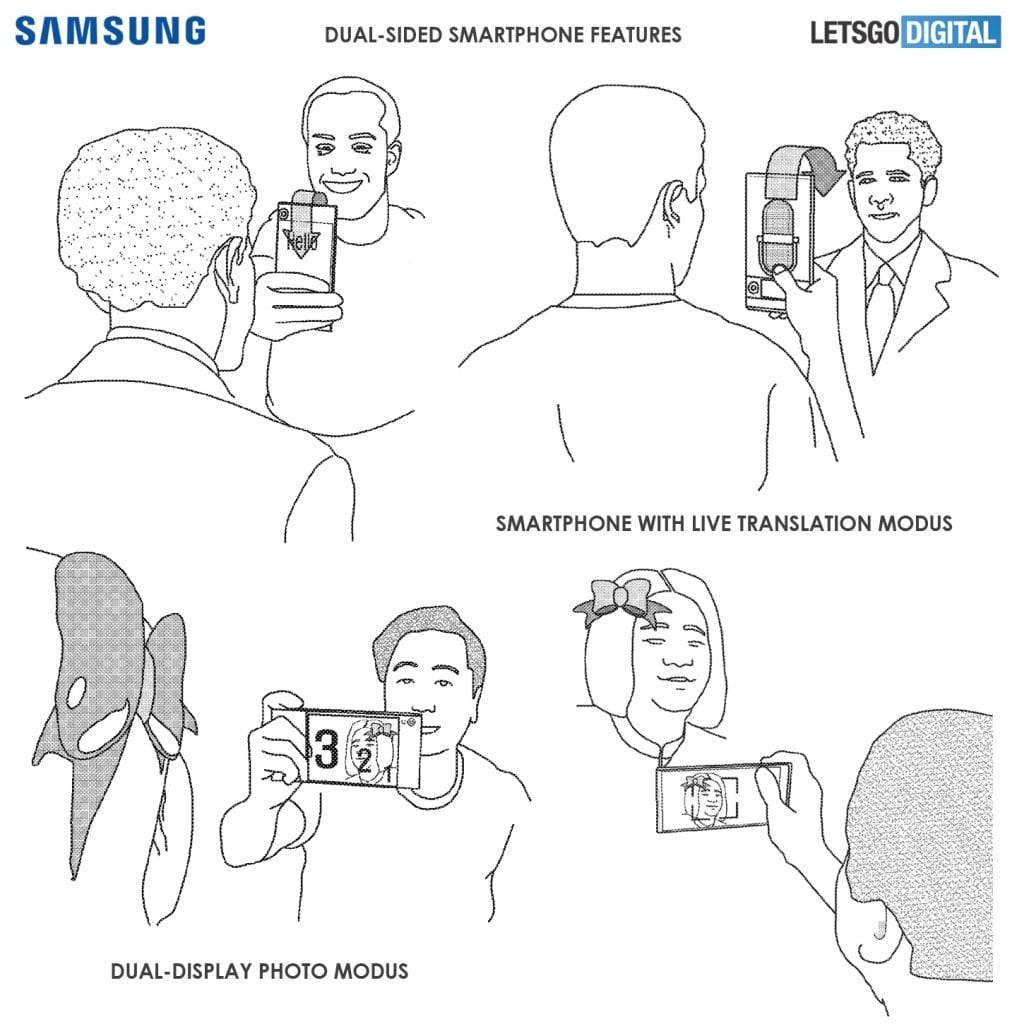 Another function where the dual screen can come in handy is when meeting international contacts. Do you not speak each other’s language, or not well enough?

Then one person can talk to the smartphone in his or her own language, after which the other can read the translation in real time on the other side of the device.

This works visa versa so that a real conversation can be conducted, even though you don’t understand each other’s language.

The patent then examines the operating options. By hovering your hand over the screen (hovering), that conscious screen part becomes active. Although there is no storage compartment for a stylus pen included in the patent images, the description does mention the use of a stylus pen.

So you can not only activate the screen by hovering over it with your hand but also with an S Pen – the well-known stylus pen for the Galaxy Note smartphones. These hover movements are detected at a distance of 2 to 5 cm from the screen, according to the patent description.

Of course, while this is just a patent, It is difficult to predict whether Samsung actually intends to put this smartphone on the market. There are, however, clear signs that more devices with a double-sided display will be introduced in the (near) future.

Vivo has filed a patent for a smartphone with an iPod-like appearance, as well as a new Zen series phone.