Xiaomi Redmi Y3 appeared on the GeekBench website, and the detailed specifications of the device were revealed. The page shows that the Redmi Y3 is equipped with Qualcomm Snapdragon 625 processor (MSM8953), equipped with 3GB of memory, a single-core score of 1236, a multi-core score of 4213, running Android 9 system. 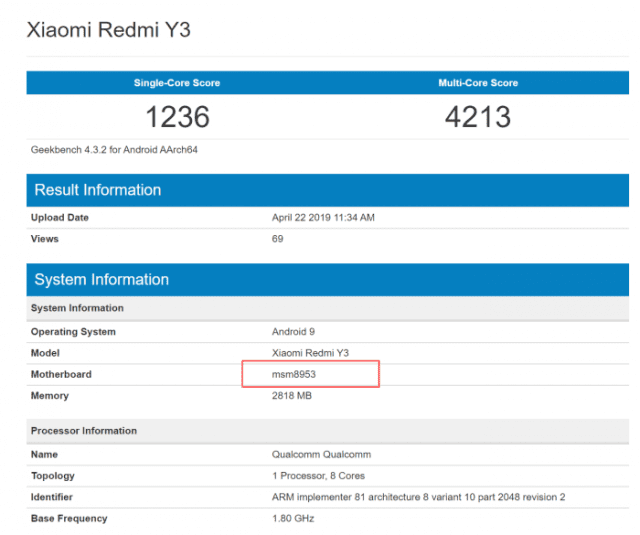 The phone will be equipped with the aging Snapdragon 625 SoC paired with 3GB RAM. The processor came out back in 2016 and was widely popular with phones like Redmi 4 high versions, Redmi Note 4X, Redmi 5 Plus, Redmi 6 Pro, XiaoMi 5X and so on.

Based on a 14nm process, the chip is Qualcomm’s first eight-core processor with a 14nm process. It uses the Cortex A53 architecture, with a CPU clocked at 2.0GHz and a GPU with the Adreno 506.

Not only that, the Redmi Y3 adopts the water drop screen form (the specific screen size is temporarily unknown), and the battery capacity is 4000 mAh.

In addition, the Redmi Y3 front 32 MP camera, this is the first front-mounted 32 MP mobile phone of the Redmi series, the self-timer effect is worth looking forward to.

The aircraft will be officially released in India on April 24th (tomorrow), we will wait and see.