Xiaomi will present many new products on March 29

Xiaomi March 29 Product LaunchEvent: As we already wrote, on Monday, March 29, the Chinese company Xiaomi has planned a big presentation. Of course, all these few days before the official announcement, a large number of advertising posters and teasers are waiting for us, because, as it turned out, we are waiting for a lot of new products.

What will be shown?

The presentation received the slogan “Endless Life“, but the number of new gadgets seems to be endless. Vice-President of Xiaomi Group Lou Veybing even advised viewers to ” cook diapers “, because the event will belong – it will last for about 3 – 4 o’clock!

What has Xiaomi prepared? In the first place, this new smartphone model: the Mi MIX, which is likely to be collapsible, the three representatives of the flagship of the family Mi 11 Lite, Mi 11 Pro, and Mi 11 Ultra.

In addition, the new fitness tracker Xiaomi Mi Band 6, which is already being actively teased in social networks, as well as the Mi Notebook Pro (2021) and the Mi Pad 5 tablet, will prematurely debut. 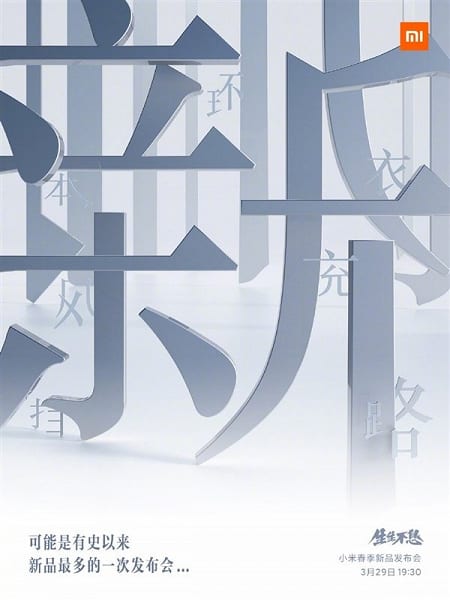 Special attention is paid to the proprietary Xiaomi chip. True, they say that this is not a full-fledged processor for a smartphone, but a control chip like an ISP. In addition, it is possible that company representatives will reveal some details about the car.

But, and that’s not all. Xiaomi has prepared a new device “smart home”, including air conditioning, robot vacuum cleaners, washing machines, and so on. D.

Huawei will release a stable version of HarmonyOS in April: the first will receive the foldable smartphone Huawei Mate X2

One of the cheapest on the market: Redmi gaming smartphone will receive Dimensity 1200, 5000 mAh battery and 65 W charging